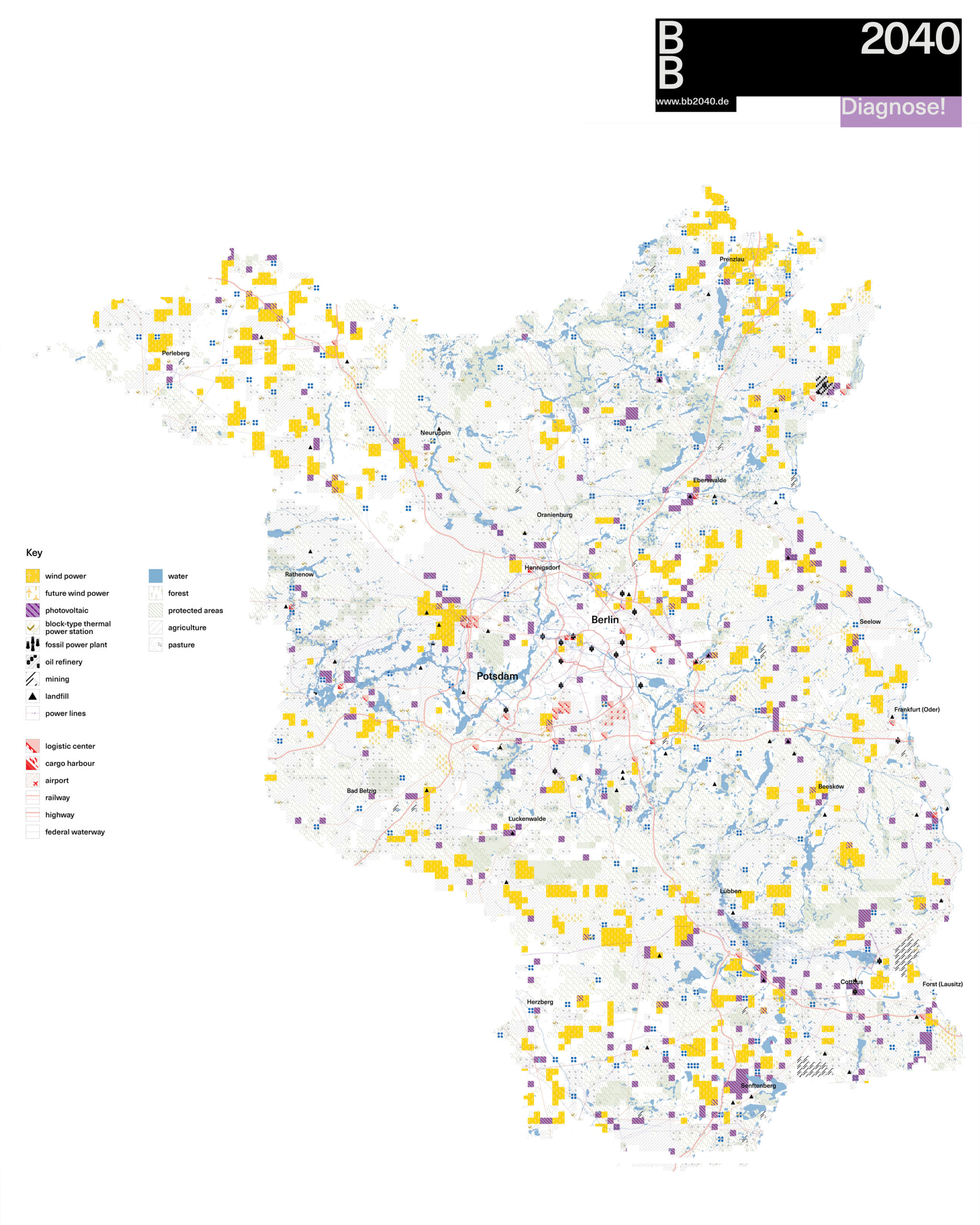 How many infrastructures have you used today?

There are many things you might take for granted – the water coming out of the tap, the fridge keeping your food fresh, the Kita taking care of your kids; even the trains being late, or the streetscapes being filled by unmoving cars.
It all seems stable, as if it has been there forever, but this status quo can change in the next decades – and it probably will. Until then, reaching our collectively-agreed – and collectively-desired – goals of inclusive, equitable, and ecologically-sustainable living in Berlin-Brandenburg will require a number of vital systemic changes and ‘infrastructural turns’. As the binding tissue of urbanisation, infrastructure can act as an important lever for change.

By looking at the future possibilities of infrastructure and the demands to be placed upon it, the aim of #BB2040 is to engage us in reconceiving and negotiating the material realities of today for the sake of tomorrow.

The map above gives the onlooker an insight into the complex infrastructural land use patterns underlying BerlinBrandenburg at this very day. In order to represent this immense data in a comprehensible and spatially pictorial manner, here we achieved an abstraction via rasterization and statistical graphics methodology. The mapping has geodata sets as its basis, which assign themes and attributes to the overlaid grid with a tile size of 1.5x1.5 km, where each square visually represents either a single spatial use or the superimposition of multiple uses. The energy landscape shows renewable energy sources such as wind turbines and large photovoltaic plants, which are contrasted with fossil power plants and the extraction sites of natural resources. Furthermore, land use by agriculture and forestry is represented by forests, arable land and pastures. The connecting link is a landscape of resources, goods, energy and people flow, where lines represent waterways, motorways, railway lines, power lines; and areas represent airports, ports, refineries, goods distribution centers and a summary of logistics locations. At the end of the flows are sewage treatment plants and landfills; meanwhile the map also highlights how the infrastructure landscape contrasts with the natural residual spaces of nature conservation areas.

The short paragraphs hereafter are a very brief introduction to the for themes this platform is inviting to explore.

The backbone of urbanity

Hidden in plain sight, we don’t usually pay infrastructure much attention, except when it fails us at the worst possible moment. Despite being easily overlooked, it constitutes the backbone that keeps our metropolitan region running. Infrastructure hybridizes material objects and artifacts with immaterial qualities and practices; it relates natural, post-natural and cultural spheres; it brings people together through its use, operation and appreciation; it connects the historical with the present; it reshapes local scenery along the networks of circulation and extraction across the whole world; it renders places valuable or unattractive: We want to have it close - but not in our backyard.

Infrastructure for the 21st Century

Although most infrastructure needs careful planning and large investments, it can be quite vulnerable and subject to flux and shifts. Looking toward the future, infrastructures may need to be altered, adapted, invented, or retained. The last half year has exposed many vulnerabilities of the globalized urban condition that our society is based upon alerting us to its routes and chokepoints, particularly in supply chains and mobility networks. How our various infrastructures need to adapt in the face of upcoming transformations, which potentials fading infrastructures expose, and which emerging infrastructures we should provide space for are all concerns of the BB2040 project.

The city is alive: the region in constant transformation

Cities become alive through a symbiotic relationship with their inhabitants, who, whether human or other-than-human, transform the city and are transformed by it. These transformations happen either actively, by planning towards a vision, or passively, by accepting the status quo; however, both ways are needed: not everything has to be left as-is, nor constantly renegotiated.

While planning, we project and reproduce visions of a(n ideal) city; the definition of which is continuously updated. Today, as we confront the “Great Transformation” for a decarbonised future and a healthy new relationship with our earthly habitat, it is demanded of us that we think and act beyond economic globalisation, built on an agenda of resource extraction, towards planetary thinking, joined-up across places and habitats.

Transformation Design & the Power of the Unknown

Modern humans feel compelled to plan to cope with uncertainty, though we are often taken by surprise. Unexpected events tend to be highly disruptive because we fail to predict them: no matter how much we study our environment, there will always be unknown unknowns that will transform our daily lives. However overwhelming that might be, we can still create robust mechanisms to make our infrastructures more elastic through design.

In the face of expected challenges, such as Climate Change, demographic shifts, resource depletion and the digital revolution; we could plan the adaptations needed to prevent systems from failing, but how can we transform beyond mere resiliency? Without a clear vision of where we want to go, individualistic agendas might be imposed on us. We must write our future in the genre of Magical Realism – envisioning with our feet on the ground.

Since its origins upon a swamp in a sandy post-glacial landscape, Berlin has spent much of the past 150 years as an urban canvas, upon which visions have been imposed with great regularity. Traces of ambitious construction and brutal destruction reside in sedimentary layers of its historic urban fabric, the polycentric metropolitan carpet of 100-year-old Greater Berlin, where the fallow plots of the after war aftermath, the no-man's land of the divided city, or the gaps in the West's “green archipelago”, are hastily being filled. Today with Berlin's rapid growth and housing pressure, the boundaries of the metropolitan compound extend far into Brandenburg.

Where is the edge of the city? The boundaries of today's metropolitan compound extend out at least 50 km into Brandenburg in a star-shape formed by transport arteries. After decades of mutual ambivalence, Brandenburg is finally enjoying the spoils of Greater Berlin’s rebounded prosperity. Though its (internal) peripheries are dying out and drying out, Brandenburg is the glue that connects Berlin with the outside world. More than simply nourishing the region with food and energy, and its lakes and forests providing a retreat for its citizens, Brandenburg’s ample spatial resources accommodate the large-scale infrastructural and spatial demands of the global economy – airports, logistics, fulfilment centres – as well as its workforce.

2020, the year that put our expectations on hold, is the horizon to the future. The recent state of exception has shown us that the politically unthinkable can suddenly be achieved overnight. Yet, there’s still a great deal to accomplish by our self-imposed deadline of 2040.

Looking at the remainder of the urbanised century ahead, we must learn to better understand the dialectics of city and non-city, as well as finally acknowledge that there is no alternative but to address coming challenges as a planet, rather than just as nations or individuals. Indeed, planetary challenges do need to be addressed locally too. Due to the Paris Agreement, it is now enshrined in law that by 2038, Germany will at least have ended its most toxic relationship – with coal, pledging to replant woodlands where it was once extracted. Might this date be the turning point to a new regenerative era?

Humans trying to envision a future habitat worth having

Humankind has accomplished a lot, but the ability to look into the future still evades us. Are we headed towards an all-electric utopia powered by clean renewables, business-as-usual on life-support via geo-engineering, or even anarchic communes in the woods? The answer depends on the agenda of whom we ask, and the reality will most likely be none-of-the-above.

Technological advancements have so far served to accelerate our overindulgence of the earth’s resources, hence, we often project a dire future based on the assumption that we will not be able to change our behaviour in time. It seems that two scenarios are being worked on in parallel: building Gigafactories for a post-fossil future, while terraforming other planets in case that can’t be delivered on time. Prepping might not create a future worth having, so how can we formulate a positive narrative that drives transformation, and what is a workable time-frame to do it in?