The project investigates different intersections of operational, productive and protective landscapes. Productive and operational landscapes are defined as those which have the function of economic production, in this case mainly agricultural landscapes, whereas protective landscapes are defined as natural or semi-natural systems that regulate and influence vital processes within the ecosystem. In the process of understanding and analysing these landscapes and their synergies we started with developing an intellectual framework taking the perspective of Critical Zones and Symbiotic Earth. Here we understand the Critical Zone both as a physical layer of the Earth, where chemical reactions make all life manifest, but also as a socio-political construct which aims to mediate between different actors and instigate new relations towards the life-sustaining envelope. The concept of Symbiotic Earth moves away from the notions of Darwinian theories towards an understanding of mutual connectedness between life forms and non-organic matter. We use the concept of a holobiont, the symbiotic unit of mutually supportive organisms as a starting point in deriving principles of synergies that can be detected and established between different types of landscapes and systems in order to conceive them as a whole and cope with their complexities.

The agencies of climate change and digitalisation are taken into consideration along with their potential to initiate new challenges and possibilities for the regional landscapes. By introducing these aspects into the equation, and by adding more complexity we strive to create a new model which is in turn able to disentangle the web of connections and recognize and emphasize new ones. Climate change is amplifying weather extremes such as droughts and floods. Rapidly changing temperatures impact the crop plantation and growing, while CO2 emissions in the air are increasing. This process poses two challenges: how to adapt the artificial and natural systems to the newly created conditions, and how to maintain an overview over the complexities that arise from these transformations. Digitalization on the other hand presents an opportunity embodied in the networks of sensors on the ground, in the air and satellites in the orbit which are triangulated and provide new ways to collect, observe and visualize the processes tied to all of the above mentioned actors and agencies. Technology is used not as a mean to subjugate the natural landscapes and lead to their further decay, but as a tool to ensure the preservation of their vital role within the Critical Zone(s).

[fig. 1] Synergetic development of operational, productive and protective systems on a regional level of Brandenburg has to take climate impact as well as the possibilities of digitalisation into account. All future intersections between different systems should be aiming to establish symbiotic relations and to strengthen intersystemic exchange.

After investigating productive and protective landscapes and their manifold intersections in Brandenburg , forests with their self-regulating systems, agricultural fields and artificial system of water treatment transpired to be the ones of special interest to the project. We look at forests as a whole and their positive impact to the environment concerning the enhancement of the structure of the soil, regulation of underground water streams, and as carbon sink with the capacity to take in and process significant amounts of CO2 emitted by the agricultural production in the surrounding area. The forests in Brandenburg are structured predominantly either as coniferous or mixed forest, and then lastly as deciduous forests. Our proposal includes restructuring of coniferous forests into mixed and deciduous forests because the latter have demonstrated higher qualities and a more positive impact to the environment concerning the structure of soil, more stable carbon sinks and higher degrees of biodiversity. 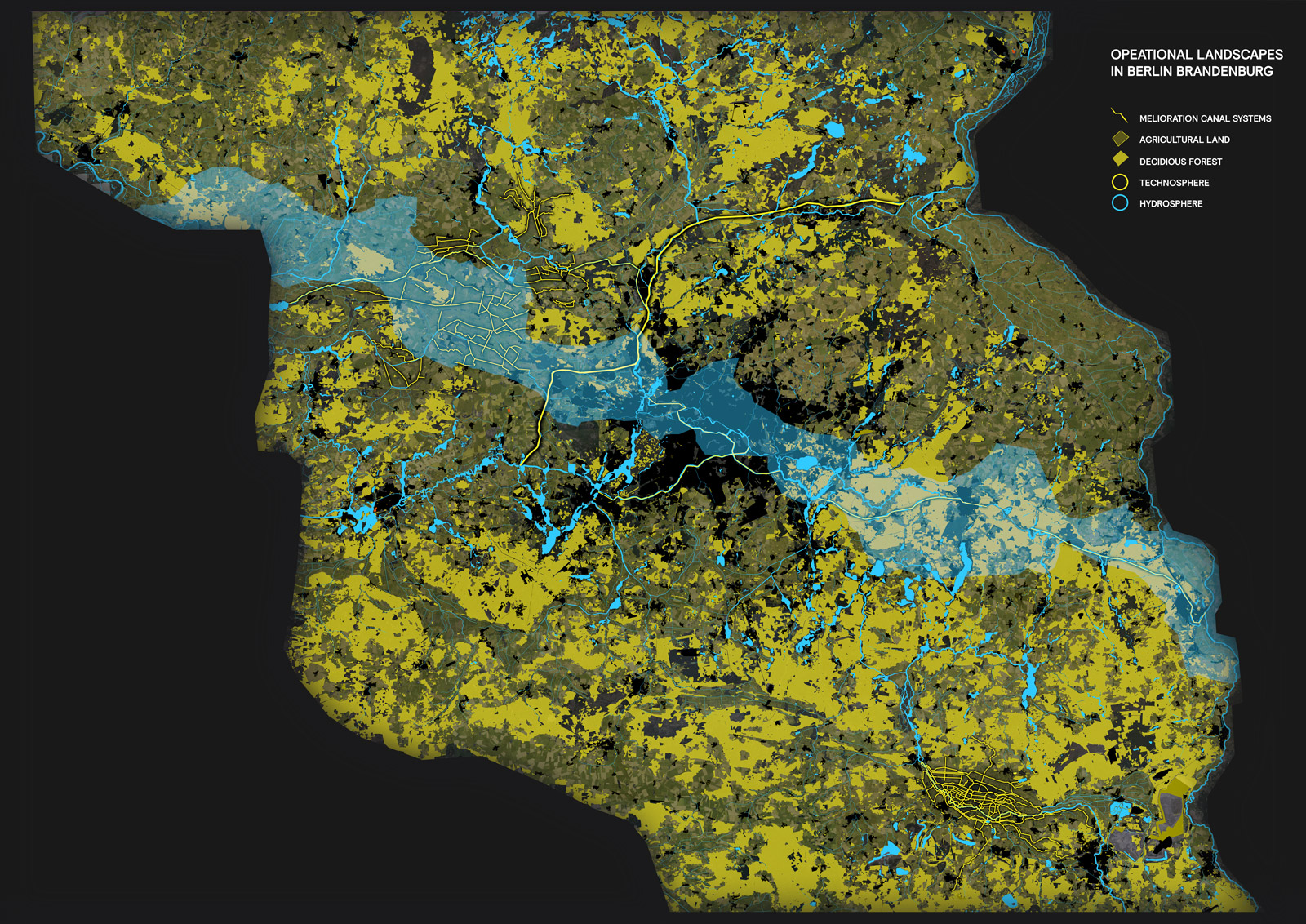 [fig. 2] Tracing the operational landscapes in Berlin and Brandenburg, it becomes obvious how most landscapes are highly operational in their sense of being exploited for productional reasons. Most forests are pure pine forests, while little grassland is existing and most open spaces are of agricultural use. 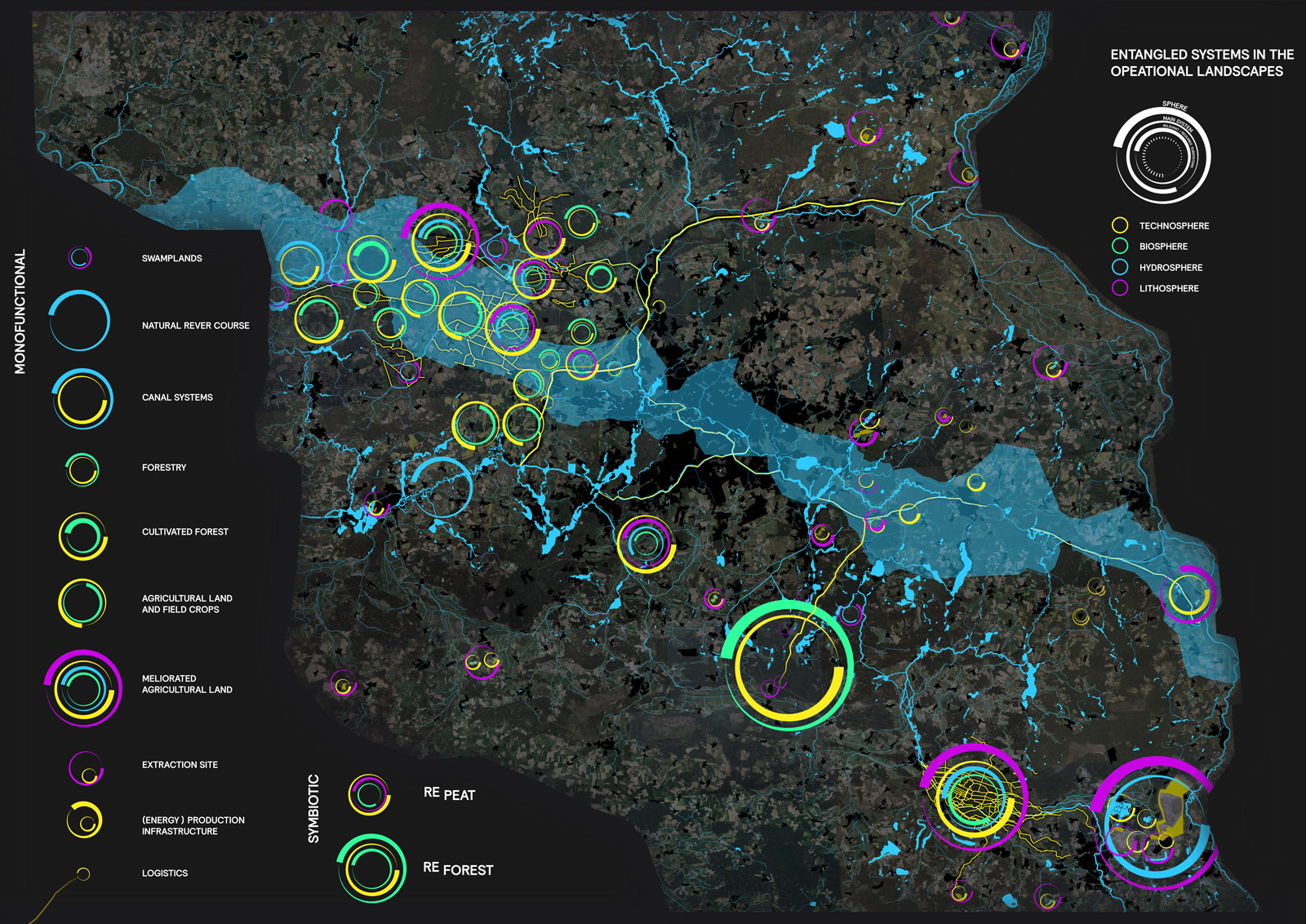 Peat soils on the other hand developed in swamp lands for thousands of years. During this process carbon is bound in the sediments composting under water, what makes peat soil a highly effective carbon sink. During digging up peat soil CO2 is released into the atmosphere and accounts for high percentages of human carbon emission. Furthermore, certain practices of agricultural production, monocultures, along with the usage of fertilizers have diminished the soil quality severely. To balance the loss of carbon sinks due to changes in land use, we propose the transformation of designated agricultural fields for peat soil cultivation and the plantation of peat moss as a field crop. Beside the advantage of a heightened capacity to serve as efficient carbon sink this offers multiple upsides such as the higher level of biodiversity and better water regulation and retention possibilities. Because of its nutritive values peat moss substrate can substitute highly unsustainable peat soil extraction and becomes a valuable economic commodity and agricultural product.

The existing water treatment facility in the Pausin area is included in the complex system as an artificial system which takes in the waste water from the urban structure, processes it, and then returns the water into the landscape and the cycle. The system is connected with the water canals in order to make the water distribution optimal. When observed as a whole the system of the restructured forest provides a better regulation to underground waterways, the peat soil provides greater retention of water, and the artificial processing system provides new amounts of water to the area. In this way a symbiotic cycle is created that ensures the higher amount of water in general for the area that is already heavily affected by the rising temperatures and droughts. 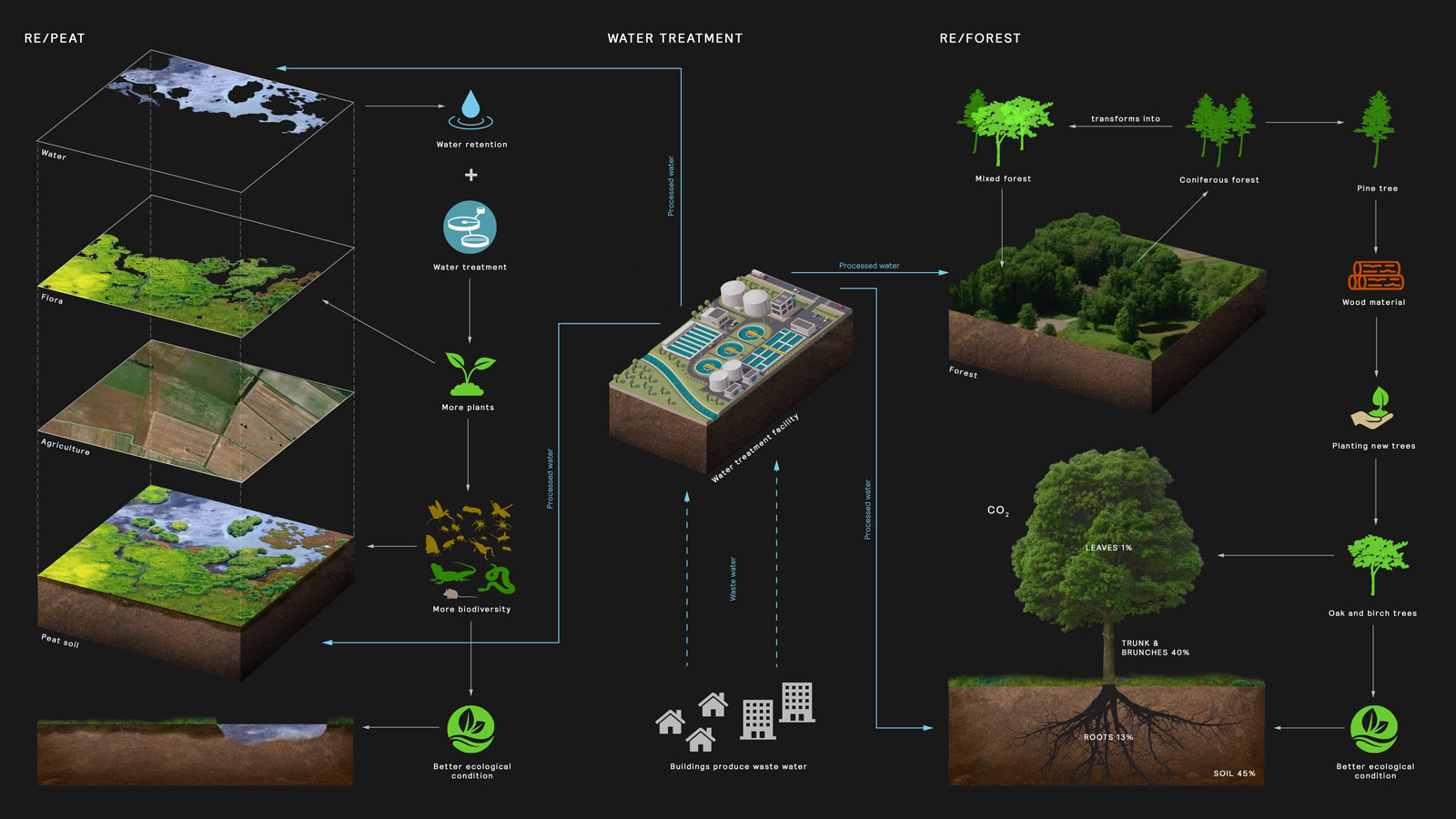 [fig. 4] Both new systems of Repeat and Reforest will establish within phases and over a longer period of time. To facilitate the development the existing water treatment infrastructure plays a crucial role.

[fig. 5] To map RE-Forest and RE-Peat on site and to introduce new synergies in the Pausin Area various data generated insights are taken into account. Overlaying climate and system given indicators with existing infrastructural systems makes the introduction of the new systems feasible.

Carbon cycles have different times scales and some of them are deep time processes inscribed into the structure of the various intertwined spheres. Deeper understanding of these cycles established a course of action which takes into account both the temporality of the interventions and their reach into the spheres. Processes such as decomposition and respiration have an impact onto the biosphere and hydrosphere, while combustion has an influence onto the atmosphere. The decoupling of these processes helps to better comprehend the complexity and possible impact of the intervention in terms of its depth rather than mere areal scope. Here we decode and detect the processes with short-term impact and immediate consequences in the area which are tied to the restructuring of forests and agriculture fields, and the longer-term perspective which observes the carbon reservoirs bound in the lithosphere and their retention. Also, long-term perspective emphasizes patience in the process of transforming soil into peat soil with peat moss and the processes of gradual carbon binding through sedimentation.

Sensors and Satellites as Tools of Digitalization

Systems of sensors and satellites are introduced to monitor, collect data and inform in real time in order to enable the operators, critical zonists and designers to actively engage in research and design activities to preserve the equilibrium of life-sustaining systems and the processes within the newly conceived model. Sensors on the ground collect data on the presence of CO2 in the atmosphere, the amount of oxygen in the soil, as well as temperature, moisture and climate fluctuations in the region. Satellites monitor biomass, grassland, structure of the landscape, potential threats such as fires, water streams and general land use. Collected information comprises large volumes of data out of which meaningful patterns are recognized which further inform the course of action toward the system. 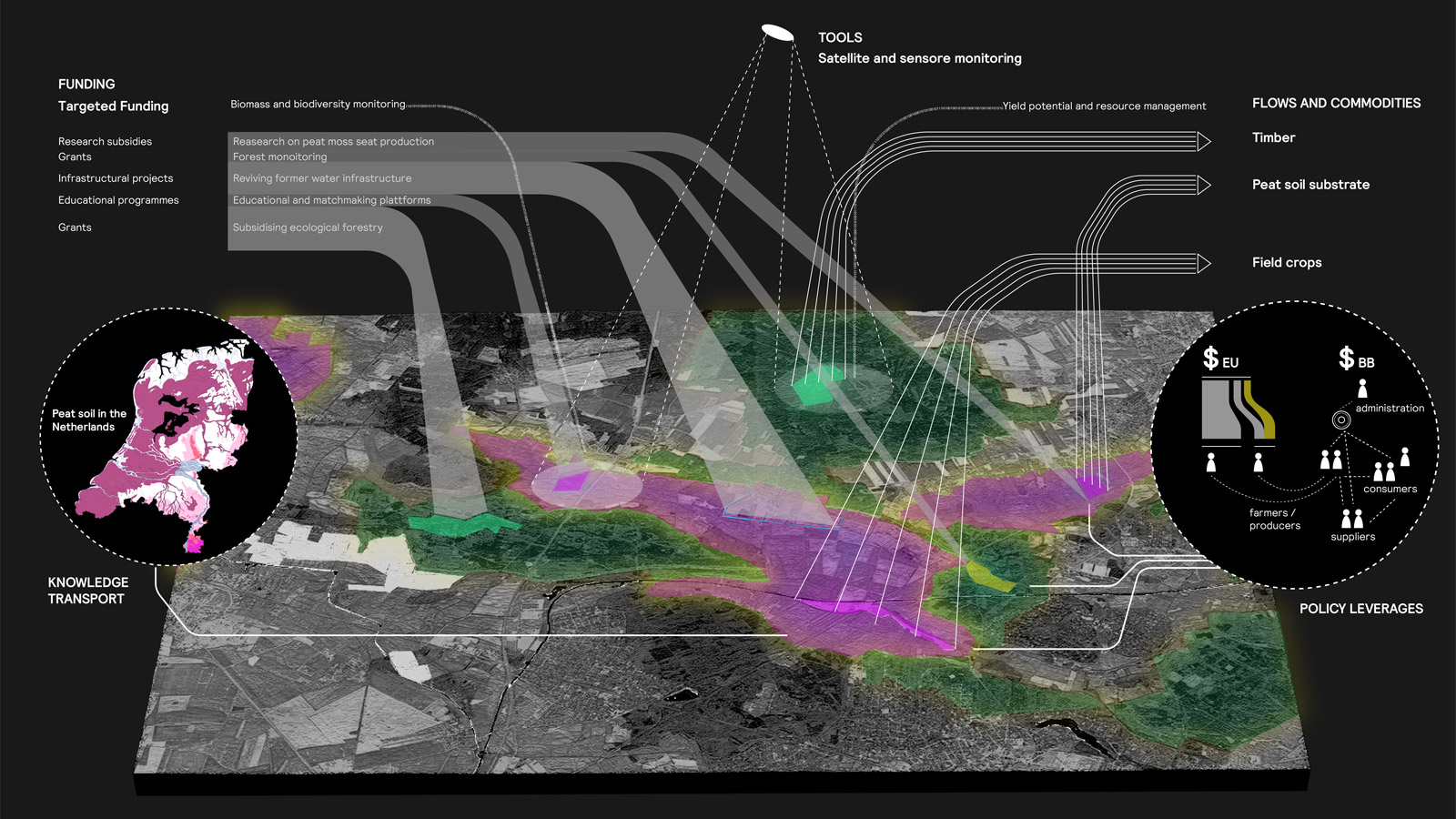 [fig. 7] While data insight from sensable earth systems of satellite and sensor monitoring are used to direct policy making towards specific interventions, both RE-Forest and RE-Peat generate more sustainable flows of commodities and supply chains. The concepts gain more significance as other European Countries are facing similar challenges, especially those with great amounts of peat soil like the Netherlands or the Baltic States.